mucks: now with the dvtm flavor!

I played with quotes in tmux “send-keys” command, and it turned out that different shells treat quotes in the “read” command very differently, and I found no easy way to overcome it.

That’s how AWK came to the rescue. A more mature, yet much simpler language made my code cleaner and shorter.

Users would not notice it, since the configuration file syntax remains the same.

For those who missed the first part - the session configuration file is normally called .mucksrc and stays in the directory you call mucks from (e.g. cd myproject && mucks).

Below the pane layout is described. Section names are panes and content in between is just typed into the pane, e.g. this will open vim and type “hello” in it:

Since mucks is targeted to many popular muxers - I decided to leave the unification of them up to you. I believe people don’t often use two different muxers on the same project.

Anyway, now you can insert any internal muxer commands anywhere in the layout. Only those that match the current muxer will be executed. For example:

A special case for the hook is a shell hook starting with “sh”. That’s extremely helpful for controlling ncurses apps and I think I beat the Tmuxinator here (last time I checked it - it could not change the colorscheme of my vim):

Here the colorscheme command will be executed 200ms after the vim has started and it works fine. But if you type it immediately - most like it will not be interpreted by vim at all.

I think that DVTM is a very nice app. Even though I prefer tmux - I really like the simplicity of the DVTM and the look.

With a tiny modification it can be controlled with mucks as well! You will need to enable “send” command in your config.h so you could send actual commands to the named pipe when the DVTM is in the background:

Also, you should use it in pair with abduco (which a believe you already do if you picked DVTM).

So here’s how these three great muxers look when controlled by mucks with the same environment: 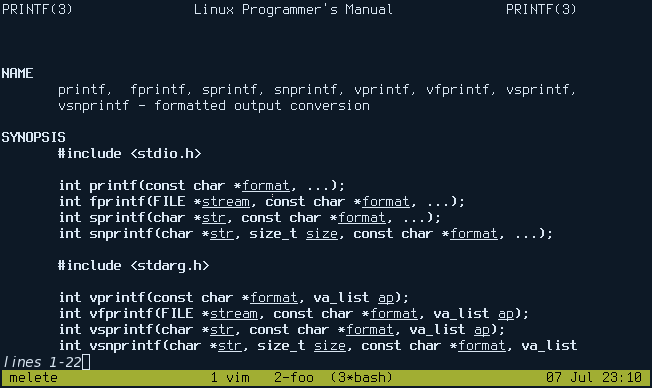 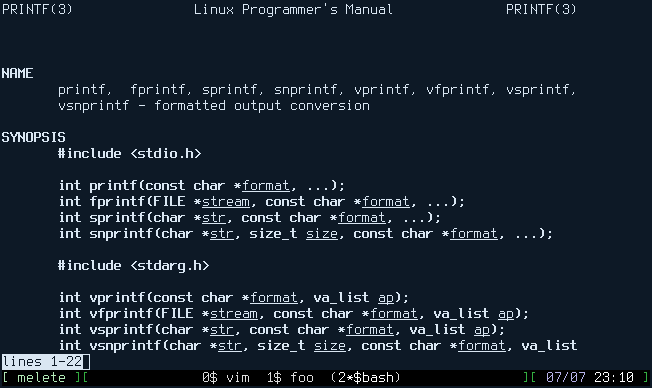 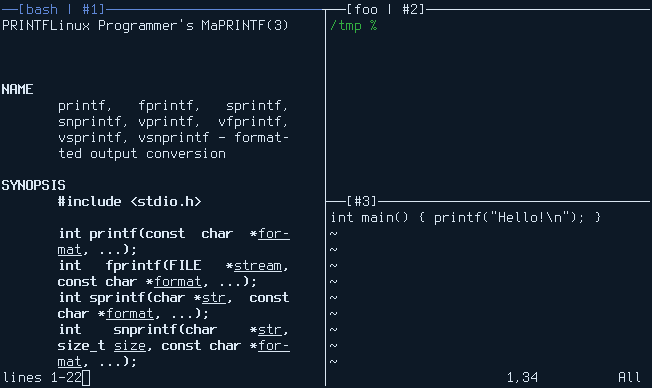 So, what’s your favourite terminal multiplexor?