I like the idea of Android home screen widgets. I like to visualize information, to get it quickly and perform common tasks in a single tap. Even though Android market is flooded with useful and not-so-useful widgets of any type and price, I was looking for a geeky way to make my own widgets.

Normally, I need either very simple widgets (like clock, calendar, weather, battery level) or very specific ones (say, a calendar that draws a date in red if it’s a holiday in my country). And I want to have a single app to deal with all those widgets.

Finally, for my very custom widgets I’d like to customize everything: colors, fonts, layout etc. So, I’ll need some kind of a programming language and maybe a simple markup language to do that.

In other words, all I need is a “DIY widget for geeks”. And all I have for now is an early prototype with bugs and limited functionality. I’ll describe it below and you will be able to try it out by yourself.

You install a single app. Then you add a widget and give it a name. This name is a name of the widget’s configuration file (widget script).

Then you open that script with any text editor right on your phone/tablet, or on the PC if you don’t like on-screen keyboards (don’t forget to copy the file back to the device after you’ve modified it). It’s just a text file, so that should be easy.

The configuration language must be simple yet powerful. I was thinking of using embeddable languages, and my final choice is - Scheme. I use Peter Norvig’s toy interpreter written in Java. Even though it’s very old, and the code is not the state-of-the-art, I still like it, because:

To sum up, you write a Scheme script that tells how your widget looks like and how it works - and that’s all you do to set up a widget.

If you still want to try Textizer at your own risk - let’s start with downloading an *.apk and install it on the device. Then add a new textizer widget to your home screen - for example, ‘Textizer 1x1’. You’ll see a window asking you for a new widget name.

In this example we’ll make a simple calendar widget showing current date, so let’s name a widget - ‘calendar’. After you press ‘Ok’ button, a new scheme script will be created at the <sdcard>/Android/data/trikita.textizer/files/calendar.scm.

If you have a text editor on your device - you can directly open that file, otherwise - use any text editor on your PC (in this case you’ll have to copy scripts to and from the device manually using adb push/pull, AirDroid, your android file manager capabilities etc).

Here’s the initial contents of the calendar.scm file:

(grid ...) and (cell ...) are the functions to create a grid-based layout. In the example above we’ve created a 1x1 grid with the background color “#80333333” (semi-transparent gray) and update interval of 60 seconds. Inside the grid we’ve created a single 1x1 cell at the top left corner (with coordinates x=1, y=1) and with text “calendar” on it. If you change the text (and copy the file back to the device if you did editing on the PC) you’ll see the widget has changed, too.

Grid-based layout is easy to implement, easy to understand and it should work for most cases. You can take a widget as a regular grid of the given width and height. For example, here’s a grid of size 4x2:

The first two numbers in the cell rectangle are coordinates of the logical cell in a grid, and the last two numbers are width and height.

This layout can be produced by a script like:

Every logical cell has its own content, font style, alignment etc. For now the only things common for the whole grid (the whole widget) are background color and update interval.

The sample script above is pretty much useless as it displays just static plain text content. How can we make cell content dynamic?

Every cell has a provider. A provider can be a string (we’ve seen above), a function or a lambda (an unnamed function). Provider function is being executed every time the widget is updated. Provider function sets cell style and returns a text to be written inside the cell.

Before going to the textizer internals, I’d like to remind you the basics of Scheme syntax. To call a function instead of func(arg1, arg2, arg3) you are to write (func arg1 arg2 arg3)`. Normally, arguments are evaluated before passing to the function. If you want something not to be evaluated - use a quote symbol, for example:

So, the second argument of the (cell '(x y w h) ...) function is a content provider. If it’s a name of the function - quote it. Otherwise it will be evaluated only once (when the cell is created), but not every time the widget is updated. You can pass an arbitrary number of arguments to the provider function - just write them one after another after the provider name.

Here’s a sample usage of a simple clock provider:

Here we assign a clock provider with the format string of “HH:mm” to the cell.

We can create our own providers easily. Here’s the sources of our calendar widget script:

And the result is: 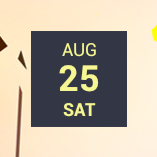 Here’s an example of another widget created with textizer (converting time to text and pretty-printing is done purely in Scheme):

Here’s a list of functions you can use to customize your textizer widgets:

As it’s just a proof-of-concept the customization is very limited. In future I think of extending it.

is there any future for textizer?

Textizer is still in its early stage. What’s to be implemented next?

So, what do you think? Is there any sense in such a widget for geeks?

P.S. Textizer is open source, free and with no ads. The sources are hosted on bitbucket.